What I learned about water

Waves and ripples are tricky to draw and paint, for many reasons.
They
are in constant motion,
display complex interactions,
reflect light (which stymies our usual conventions for rendering form with light and shadow),
are seen in perspective over a horizontal surface, which is bad enough by itself, but they also take the form of curves and concentric circles radiating from randomly scattered centers,
and they exist both as individual waves and as an overall system of forces.
Even photographs often fail to convey the sense of rhythmic motion and hypnotic metamorphosis that makes water so captivating to look at.

I've spent a lot of time painting water, and have sometimes gotten decent results, but they were haphazard and unpredictable. I didn't really understand what I was looking at.

While on vacation last week, inspired by the excellent advice on this thread, I decided to try to advance my understanding a bit. For starters, I heeded the wisdom of Russ, and spent the better part of a morning sitting on the dock just looking at the surface of the pond. The display changed constantly, as breezes ruffled the surface, birds and fish disturbed the surface and wave systems bounced back and forth from shore to shore. After a while, I started jotting down names for the recurring patterns that appeared:
dimpled
ruffled
piled up
wrinkled
herringbone
pointy

These were just a few of the infinite variations that flickered into being and then morphed into something else. At any moment, the surface would be divided into regions, some perfectly still, others in recurring patterns and others roiled and turbulent.
I started sketching contour and gesture; as Russ put it, "taking my pencil for a walk," not trying to get a visual likeness but to internalize the feeling of the scene and get the rhythms under my fingers. I also took photographs - stills and motor drive shots, which I could later animate or step through sequentially to see how the outward appearance changed with the wave motion. 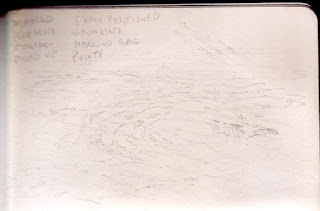 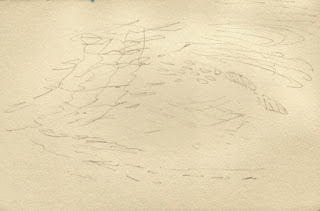 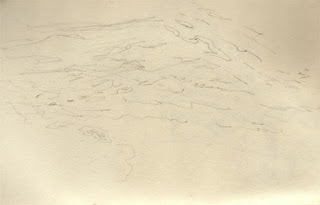 I also did some Google research on the physics of waves, and it was here that I found my "aha" moment. This site on transverse and compression waves, and the animation of a water wave as a combination of the two, gave me the key to a new way of looking at water as an artist.
http://www.acs.psu.edu/drussell/Demos/waves/wavemotion.html
(scroll down to water waves)
The basic insight is that a water wave is the outward manifestation of individual particles of water rotating about fixed positions and carrying the wave energy forward. I know I must have learned about this in school, but it hadn't struck me as relevant for art until this moment.

When I got home I looked it up in an old physics textbook, and found this diagram.

This is useful because it gives a framework to indicate the wave's forward motion in a static picture. Since the leading edge of the wave is basically climbing over the top of an implied circle, you can indicate its direction by emphasizing convex forms on the back of the wave, and, since the trough of the wave corresponds to the inside of the the bottom of the circle, you can similarly indicate motion by emphasizing concave forms.


Another way to look at it is that the space between the waves is as charged with energy as the watery part; both are parts of a whole system.

Because it is based on a simple grid with inscribed circles, you can rotate it in perspective to build the cross-sections of waves on diagonals, arcs and circles.

When waves encounter other waves, the high parts add to each other and the low parts subtract, creating interference patterns. All of the various patterns I listed above are examples of this. In any real life water scene, you will be observing many wave systems colliding with each other at multiple angles, creating peaks and valleys in bewildering profusion. It would be impossible to copy down what you see, and like a static snapshot, probably wouldn't convey the feeling anyway. What I found was that "painting what I saw" combined with the idea of the fixed circles in the back of my mind helped me to render the wave interactions.

I've gone on at some length, so if you are still reading you have my sincere gratitude. What I probably should have said earlier is that I don't intend this analytical dissection to be done as you are sitting before the glorious ocean with sketch book in hand. It's more like what was discussed up thread about theory, practice, and intuition - something to be internalized and integrated.
Nor is intended to be a formula for manufacturing an image - it has to be combined with observation, practice and experience. I feel like I have lot to learn yet.
For me, doing this analysis did indeed help the next time I went out to paint, but not because I was intellectualizing things to death. On the contrary, it gave me some tools that made it easier to solve certain problems, freeing me up to respond to the light, color and motion.