The latest iteration of the Montanapolitan Croptic sketchbook. It's similar to the last one (which was built on the earlier Neapolitan, augmented with cryptic stitching, but instead of the Arches 140 lb (300 gsm) I used the 90 lb (185 gsm) The 140 seemed out of scale for such a small format - it took a lot of water to get it primed up and the grain was a bit coarse. The 90 is closer to the Moleskine watercolor book, which I like. I also substituted the Canson Biggie sketch paper with Borden & Riley #234 Paris paper, which has a smooth, Bristol-like finish, but on a lighter, more flexible stock, and added more pages because I go through it faster than the watercolor or toned paper (which is still the same Strathmore Toned Gray). Still not winning any bookbinding prizes but gradually improving my coptic stitchery. I'm hoping to get faster a making these, because although the cost is very little, the time spent making it has a slight chilling effect on using it. In the end I don't begrudge the time, because I like having a sturdy book that will survive weeks in my back pocket and use in all sorts of adverse conditions, but I need to get the steps under my fingers instead having to go back and watch the admittedly delightful Sea Lemon tutorial every time I do it. 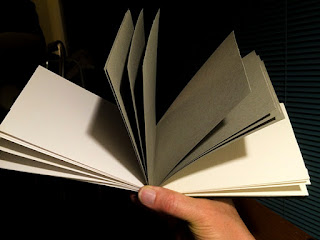 I thought the white on black layout lines for the denim cover looked kind of cool. 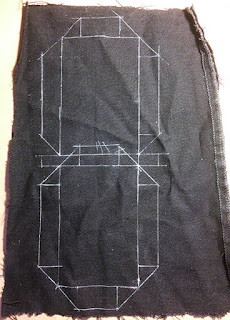