Horizon Lines and Measuring with Diagonals

The question of placing the horizon involves several factors. In this context, "the Horizon" doesn't necessarily mean the line between Earth (or Sea) and Sky (in many scenes this is not even visible); but an abstract reference line representing your eye level.
Whenever you are observing any scene, this implied horizon is present; it's an attribute of you as the observer.
If your eye level is high, the horizon is high, if your eye level is low, the horizon is low. As a general rule, this equates to larger or smaller proportions of ground plane to sky, respectively.
For purposes of simplicity, we'll confine ourselves for now to describing situations where we are looking straight ahead, parallel to the ground plane, with our heads on straight, not tilted or lying on one side.
In these situations, the horizon can be considered to be a straight horizontal line.
The horizon line will be in the center of our field of view.
Objects below our eye level will show their top planes; we are looking down on them. This is true no matter how far away they are.
Objects above our eye level will show their bottom planes, again regardless of how far away they are.
Planes exactly at eye level are not visible - only their edges are presented to the eye, in line with the horizon, regardless of distance.

The aspect of distance needs to be emphasized because objects will also appear smaller with distance, which can lead to confusion about whether we are actually above of below them. For instance, a distant building will seem so small relative to a near one that you might be tempted to believe you can look down on it - but if its roof is above the horizon line, it's still above your eye level.

These points all relate to the horizon's presence in any observation of a scene; the horizon line also has a part to play in constructing a picture.
A picture doesn't usually try to encompass one's entire field of view; it's a rectangle (let's stick with rectangular formats for the sake of simplicity) cropped out of the larger scene with its proportions and placement chosen for reasons of utility or artistic expression. The horizon line may appear at any position in this rectangle, dividing it up into whatever proportions the artist chooses. For that matter, it may not appear in the rectangle at all, but still play a role as an implied reference.
Since we are limiting the discussion as stated above, it will be a straight horizontal line at right angles to the rectangle's sides.

As an artist, how do you choose where to locate the horizon line when setting up a picture?
A major consideration is usually what you want to include. If you are viewing a seascape from a moderate height you have the option of emphasizing either one or the other or both equally. If you wanted to devote most of your painting to the sky, you would select a rectangle such that the horizon line was placed near the bottom. This will not change your relationship to the horizon as observer, and a rock that is below your eye level will still show its top plane; it simply means that you have chosen to crop out a lot of the lower part of your field of view.
Another consideration is the design of the picture itself. The horizontal division can be a very powerful factor in the overall design, and we are often warned against putting it in the middle, because that would be boring, or cut the picture in half. That's a good rule of thumb, but you are the final arbiter - you can put it wherever you think the design needs it.

This has been a lot of verbiage just get a horizontal line across a sheet of paper. Once you have it, what is it good for?
The horizon, along with the rectangular bounds of the picture, provides the basic reference against which we measure all the other elements. Every element will be some distance above or below it and oriented at some angle relative to it.
This is an area where confusion can creep in, because we use the horizon as reference for both the 2d layout of the picture and the construction of the illusion of depth with linear perspective. It's important to keep track of which you are doing when. When sketching from a scene, we typically start with the 2d layout, measuring ("sighting" in Betty Edwards' terms) the size, placement and angles of the scene's elements.
Edwards, in Drawing On the Right Side of the Brain offers this process: First, identify some easily measured element in the scene, such as a door frame top, then measure with your thumb on the pencil, call that distance your "Basic Unit," then calculate the lengths of other elements using that unit; the door frame side might be 2 and 2/3 Basic Units, in her example. You then have to translate that ratio to whatever scale your drawing is.

Frankly, this seems incredibly tedious and error prone to me. No way my big fat finger is going to accurately mark off 2/3 of a distant door top on the side of pencil. All that converting into numbers and back into shapes - way too left brained (which she admits).
However, the very next paragraph, she is on to measuring angles, using the pencil to gauge them relative to the horizontal and vertical lines, and visualizing the triangles they make as aids to memory when transferring them to paper.
Which leads me to ask

WHY NOT JUST USE ANGLES FOR EVERYTHING?

When measuring, we are concerned not with absolute quantities, but with ratios. Ratios can be expressed with slopes (angles)! Any shape or collection of shapes can be imagined as bounded by a rectangle, and the proportions of the rectangle are given by its diagonal.
Given a rectangle of a given format and a horizon line of a chosen position, start by simply measuring the diagonals of the whole picture and of the upper and lower sections. Use the diagonals to find the center points and horizontal and vertical center lines. Mark or memorize these. Then find the largest element and visualize a bounding rectangle enclosing its widest and highest points, estimate its location relative to the larger rectangles, measure its diagonal to establish its proportions, and move on the next largest element.
After a while, the layout will be well enough established that you can proceed more intuitively, without having to do so much measuring but confident that you are not going significantly awry.

Here's a little sketch I did to test out this idea. It's out of a bay window, with some squashes and aloe plants on the shelf in the foreground, then the window through which is seen a patch of back yard, a maple, a line of trees and underbrush, a small ravine with a field sloping up behind it, some more trees and buildings, and a small mountain range in the distance. The range of distances and sizes of objects make this a challenging subject, although the window provides a nice rectangular reference for free. 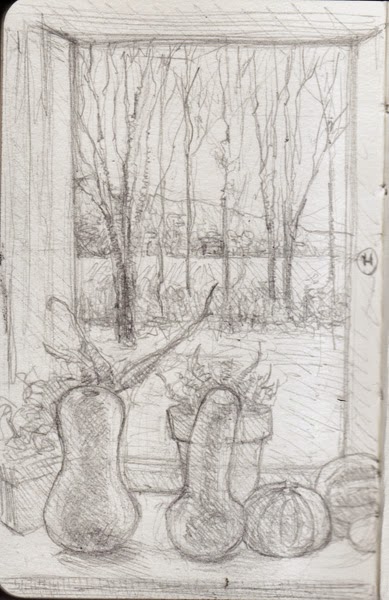 This photo more or less encompasses my actual field of view. The area I chose for the picture is miniscule in context. 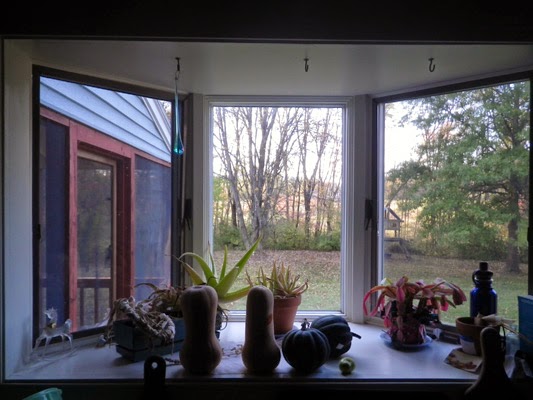 In order to figure out where my eye level was relative to the scene, I used a few different strategies. First was to make sure I was looking straight ahead and then estimating the center of my field of view. I visually extended the orthogonals of the porch on the left to see where they crossed, and noticed that they converged on a house across the field. It seemed reasonable to assume that the first floor window of that house might be roughly on a level with mine, so I placed my observed horizon there, just above the far end of the field. 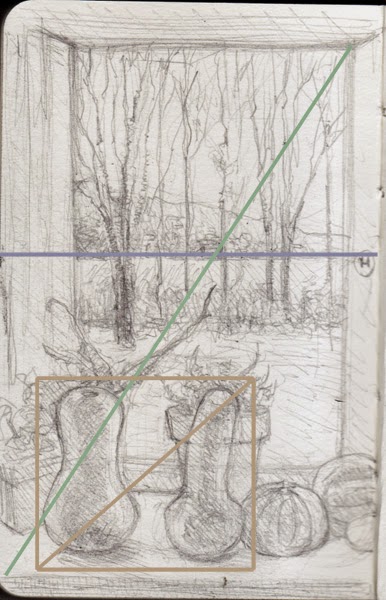 I decided I wanted to include more space for the squashes on the shelf than for the bay window ceiling, so I set the picture's horizon high, about 3/5 of the way up.
I next took a diagonal from corner to corner of the window and extended it down to bottom the page. This helped to place the near edge of the shelf, creating the space in which the squashes and plants would sit. I needed to establish the highest point that the aloe leaf reached, so I imagined a horizontal line at its tip, made a diagonal from its intersection with the window edge to the window bottom, and used that to find the point in the picture. I did a similar exercise to locate the far end of the back yard.
The two standing squashes seemed to function as a single design element, so I imagined a bounding box for them, pulled the diagonal, and transferred the proportions to the picture. I could see that the left squash overlapped the window frame, and, because I knew where the center line of the window was, that the right one lined up with it. Given this width and the measured diagonal, I could find the correct height for the pair, and then go in and draw them individually.
That done, I could draw the other stuff freely, knowing the basic layout was correct. Well, actually I still screwed up in a couple places, losing track of which line was which, but with this methodical approach, it would be pretty easy to fix.